Let’s talk MISTLETOE!..you see it, it hangs in doorways over the holidays and It’s not really the most beautiful plant but everyone knows what it means. Its a place where you could get attacked by someone who has been waiting and lurking for a surprise smooch!

Not so awful if you’re out, grown up and single, but being a kid I was terrified and obviously disappointed a few girls! Not only would your crush of the year mostly likely not meet you under the mistletoe, even though you imagined it repeatedly to the point that you actually believed it would happen!

For some reason putting Zack Morris on my vision board did not make him gay, show up at my high school and whisk me away from under the mistletoe. Wishful thinking at its finest but when you’re 15, hopes and dreams were attainable and just the thought of your dreams coming true somehow motivated me to be successful and believe in myself.

Those dreams obviously included one day finding that man. The man who I would bring home for Christmas… Hallmark movie style with a PG-13 gay twist!

I met Sam in September 2016, not too far from Christmas. In my family we start talking Christmas in September because my parents log home is on their Christmas Tree farm…we plan ahead and its festive overload!

As luck would have it Sam was born in Iran and their big celebration is Persian new year so I can have him all to myself to spend Christmas with me and my family every year. When Sam was a boy he made his parents put up a tree, he loves them and wanted one anyway with lots of bright lights! He likes sparkly things so It ended up being perfect!

We met at a time when we had pretty much both tossed in the towel on love, didn’t think that we would meet anyone at all interested in monogamy (yes we are a rare breed) but somehow found each other on one of those dating apps.

Sam was my Christmas wish for years and one day I got my wish. He is that man who without a doubt, will find under the mistletoe. ?? 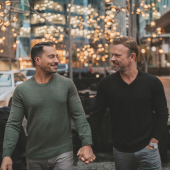